It’s hard to say when did yeserday end and today began. I spent a few hours on the bed trying to fall asleep in vain.

What was keeping me awake? The obvious jet lag, mainly, but also some worrying thoughts about the upcoming pilgrimage. At this point in time, I still had no viable plan other than reaching the first temple and sleeping in its nearbies.

I practiced both my Japanese and Clash Royale skills, feeling more and more tired, but unable to sleep.

At 6:00 AM, I went to grab my humble breakfast and thought about sharing the experience through a Live video on Facebook. It was fun! I was feeling a bit awkward but I enjoyed it, so expect more of it.

On the train from Tokushima to Naruto, I met a teacher im his sixties who was bringing his classroom to the first three temples of the pilgrimage. He was very friendly and could manage some English. We spoke about Italy, and Shikoku, football and baseball. Sometimes I did not understand what he had just said, but a simple smile usually solved everything.

During the morning, I had time to freak out for the first time already when the minshuku (sort of a family-run bed & breakfast) where I wanted to spend the night in, was closed. The only solution to this would be to call the owner, but my sim card is data-only. I went to a konbini (convenience store) to purchase a public telephone card but they had none. Fuck!

That left me with only one alternative:to ask for help. This is when the language barrier hit me the strongest. The teacher was gone already and everybody else in town apparently could not speak English. A lady managed to understand me and was kind enough to call from her phone, but nobody answered. She jumped to the conclusion that the minshuku was not going to be open at all in the evening.

I had to come up with a plan B, and quickly.

Luckily, a ryokan (traditional Japanese higher-end lodging) was just a few steps away. As a general rule, I would like to avoid ryokan in favour of minshuku: ryokan are more expensive and I want to try to save money whenever possible.

Today, however, I needed stability more than a full pocket. Hence, I took a room at the ryokan (top picture). It actually looks great! And I get to wear a yukata as well!

For lunch, I went to a small udon noodles restaurant and took whatever the waitress pointed at first. It wasn’t too bad, eventually, and also pretty cheap.

What was not cheap was the equipment I bought on my way back to the ryokan: a walking staff, main symbol of the pilgrim, the book where I will collect the stamps from all the temples, a pin for my bag and a set of “name slips” that I will use a lot.

I also received my first two osettai. The osettai is a gift that the locals give to pilgrims that walk the henro. It’s their way of showing gratitude and blessing, as the pilgrim is said to walk with togeter with Kōbō Daishi, the buddhist holy man who created the Shikoku pilgrimage in the early Middle Ages.

The first osettai was a coin wrapped in some laces that form a small turtle shape. An old lady gave it to me as soon as she got out of a taxi, close to the first temple of Ryōzen-ji. The second one was a pair of lollipops from the waitress at the udori-don restaurant.

I find it extremely kind and something that has made my already very happy and thankful.

Back at the ryokan, I decided to take a nap, as I was feeling compleely useless. Unexpectedely (sarcasm sign) it lasted way longer than it should have, as I failed to pay attention to the alarm. I heard it, but oddily no fucks were given.

I woke up just in time for dinner and, boy oh boy, the meal both looked and tasted great. 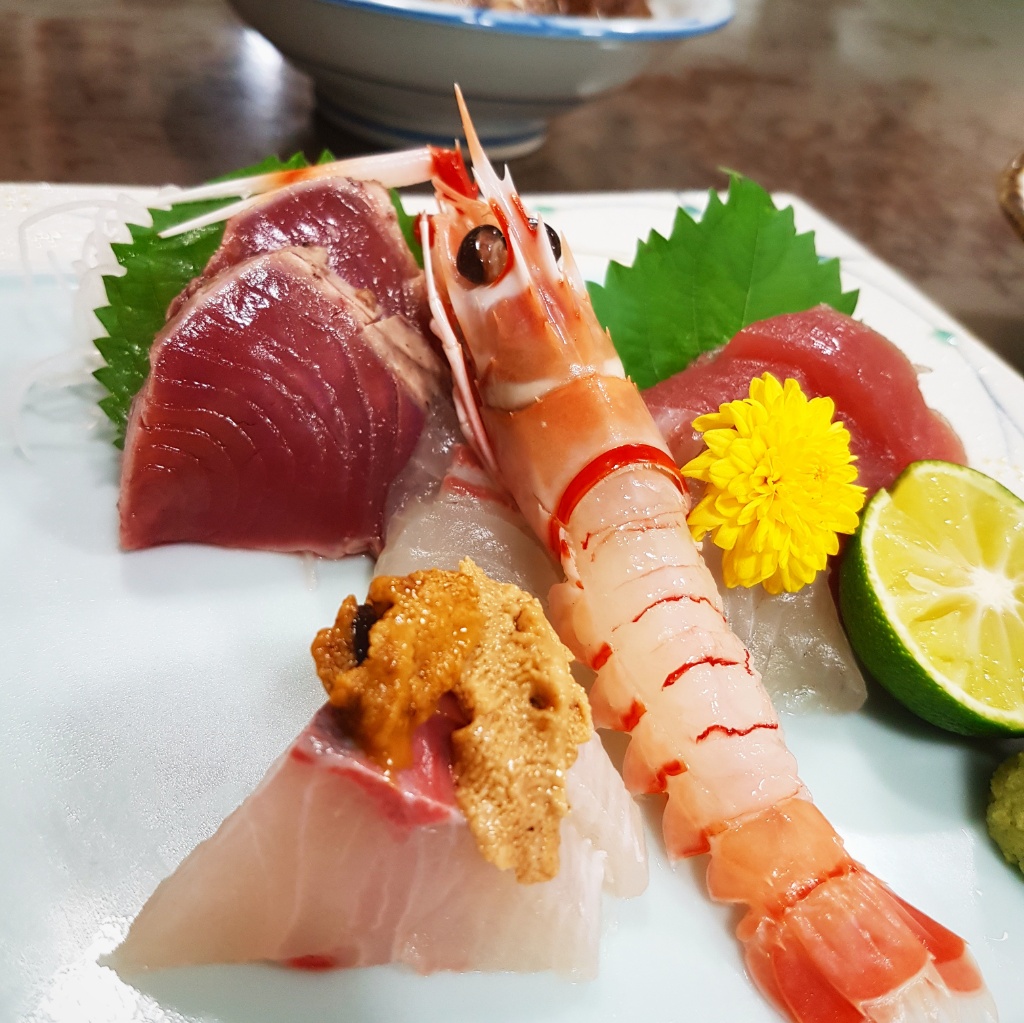 Now that my stomach is happy and busy, it’s time to prepre the futon (bed) and lie down to rest.

Tomorrow, we start to walk.

Did you find this article interesting? Share it with someone you care about 🙂

More on this blog

Rovering Life is a blog by Alessio Romito. All rights reserved, unless stated otherwise.
Loading Comments...